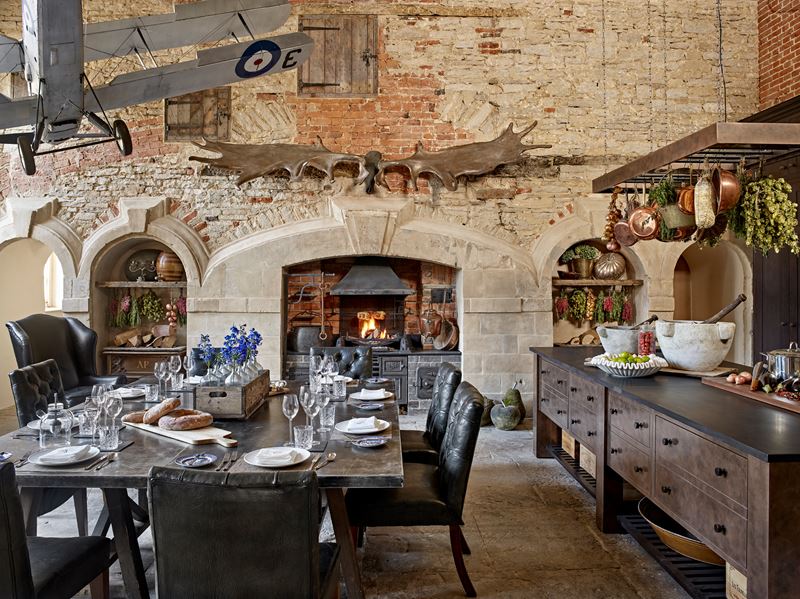 From a distance, Aynhoe Park may appear like any number of sleepy estates that dot the English countryside. Inside, though, it is a modern, playful wonderland. Curated by the eccentric eye of owner James Perkins, Aynhoe is a menagerie for the surreal, grounded in the refinement of classical architecture.

James mused about a kitchen remodel for more than a decade and included his close friend and kitchen designer Naomi Peters in his plans. When it was finally time to start, Naomi was prepared to respect the rich history of the home whilst adding present-day conveniences and a twist of modernity. The kitchen needed to serve as the center of James’s family home, as well as the host to Michelin-starred chefs who catered to the many guests and events that pass through Aynhoe Park’s gates.

The original stone walls and flagstone floors had been restored, influencing Naomi to design a kitchen of freestanding furniture. The centerpiece of the design is an impressive dresser inspired by drawings of the original kitchen, with a pediment reminiscent of those on the home’s exterior. To preserve the look of a 17th-century kitchen, Naomi concealed Wolf ovens and Sub-Zero refrigeration drawers behind pocket doors with furniture fronts and nestled warming drawers into the baker’s table. The induction cooktop can be slipped out of sight, resting under a walnut chopping block when not in use. The expansive butler’s pantry houses a Sub-Zero 48” PRO refrigerator/freezer alongside dry storage.

To juxtapose the elegance and grandeur of the high ceilings with the warmth and coziness of a family kitchen, Naomi installed a batterie de cuisine with integrated lighting to hover over the baker’s table. The bronze sink fixtures, liquid-bronze coated drawers, honed-slate worktop, and contemporary bronze knobs all add a flourish of modernity. And finally, not to be forgotten, is the dramatic addition of the bi-plane soaring over the dining table—an unmistakable mark of James’s fascination with everything whimsical.