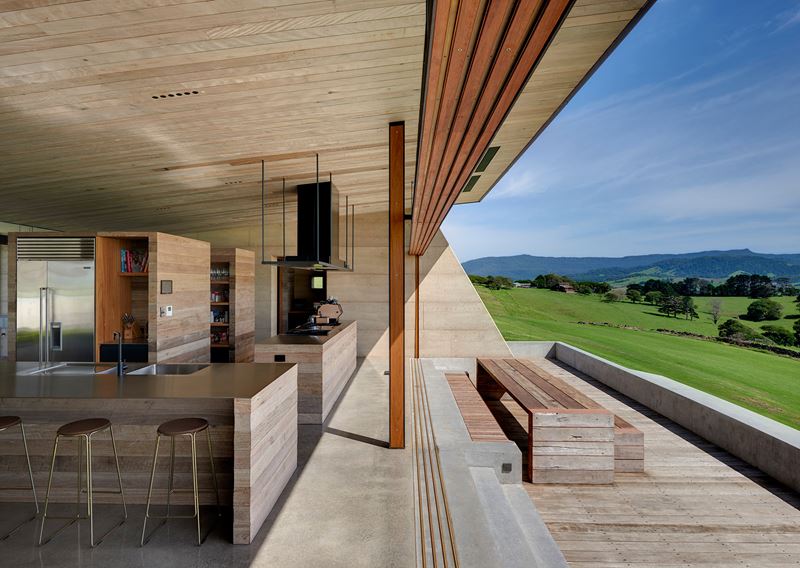 Fergus Scott creates a family retreat that brings outdoors in, indoors out. It was as beautiful a piece of land as Fergus Scott had seen, on Australia's rugged south coast, with stunning views of the Pacific Ocean and surrounding grasslands.

The clients had vacationed in the area since they were children. Now they wanted to build a retreat, which their extended family and friends could enjoy anytime they wanted. But the retreat had to be as special as the land upon which it was situated.

Fergus and his clients identified three sites that might work for the retreat. "It's incredibly windy there, with a strong sea breeze that blows in and accelerates up the hill. Finally we chose a site just below the ridgeline, where the house would appear almost as if it was emerging from the landscape, where grass could roll right up to the windowsills."

The geology of the area is deeply eroded, studded with natural stone outcrops. It was these outcrops that inspired the design of the retreat, which had come to be called The Farm. The look is almost Stonehenge-like, with blade-walled pavilions embedded in the grassland, forming spaces that are at once protected yet very open to the natural surroundings.

There is a public pavilion in front with kitchen, dining room and living room; a courtyard with pool; two pavilions with bedrooms; and a fourth pavilion with playroom and more. In the public pavilion, sliding glass doors north and south protect against the weather, or can be completely opened up to the outdoors.

"Our design for The Farm is intended to make guests feel comfortable staying there, even if the owners aren't there," says Fergus. "The kitchen is open on all sides and easy to use. We chose Sub-Zero and Wolf appliances for that reason. They're reliable, well-designed and intuitive – even if you haven't cooked with them before. And they have a robustness that will stand up to the wind and weather."

If the sea breezes get too ferocious, the kitchen can be opened out to the protected courtyard and BBQ area behind the public pavilion.

"The clients entrusted us with carrying out their wishes," says Fergus. "We appreciated that. They had the big picture in mind – a vision of sharing the beautiful landscape with family and friend. On the one hand the house promotes sociability and relaxation, with many spaces for gathering both inside and out. On the other hand it provides individual privacy with secluded bedrooms."

The minimal materials palette and attention to detail that characterizes every aspect of The Farm extends into the kitchen. The joinery is encased in carefully mitered recycled timber. Fine metalwork detail is carried into the kitchen bench tops and the careful integration of the Sub-Zero and Wolf appliances. Everything has been carefully considered. But there is a simplicity to the design – the main event, after all, is the mountains, the ocean, the flowing grasslands.

"It's often hard to allow a building to be simple and clear," says Fergus. "Toward the end, it can get complicated. But that didn't happen with The Farm – the vision of the clients ensured that. There's something elemental about it – almost as if it's been there for many years."

There's a quote on Fergus Scott's web site that captures our feelings about what he's accomplished with The Farm, from Professor Tom Heneghan of the University of Sydney school of architecture. It says this: "The design went beyond being a house. Of course it functioned exquisitely and it was beautiful looking but it took you into an area – it's going to sound bizarre – of dreams."