THE EXTRA REFRIGERATION YOU'VE WISHED FOR

How often have you wished for a larger refrigerator? Weekly? Daily? We invite you to think modular and solve your food storage problems once and for all. The Sub-Zero Designer 91 cm All-Refrigerator Column with internal dispenser delivers spacious, well-organized refrigerator storage. You'll have flavourful food on hand no matter how large your family or how often you entertain.

Rest assured it will stay fresher longer, thanks to the ICBIC-36RID's advanced food preservation features. NASA-inspired air purification scrubs the air of ethylene gas, bacteria, mould and viruses. A magnetic door seal system locks in cold, while a state-of-the-art micro-processor precisely controls temperatures. An internal dispenser delivers fresh, filtered water. And it can be fitted with stainless steel panels or custom cabinetry panels to virtually disappear into your décor. less

THE DISPENSER THAT DEFENDS YOUR DESIGN

In the 1950's, Sub-Zero pioneered built-in refrigeration. And in the 1990's, we took that concept a step further with integrated refrigeration – appliances that virtually disappear in your cabinetry, with neither a hinge nor a grille visible.

Big concepts. But we think of the little things too. Like offering several of our designer models with a discreet internal water dispenser, which doesn't interfere with the seamless look of your cabinetry.

Of course, it's about more than aesthetics: our internal dispenser also provides fresh, filtered water free of suspended particles, contaminants and chlorine taste and odors.

Fresh ideas. It's what we're all about. 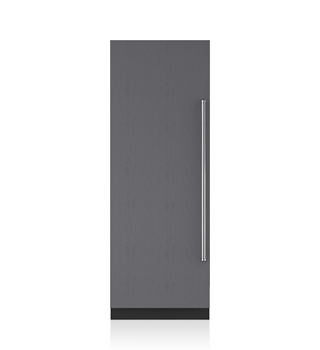 Dozens of pages of inspiring photos, product features and more in print and online. Discover a world of beautiful, high-performance and top-quality products for your dream kitchen with this free guide from Sub-Zero and Wolf.

Anywhere you want it. Innovative integrated refrigeration becomes one with its surroundings.

From minimalist contemporary to bold professional, there is a Wolf M series built-in oven to match your style.

Enjoy a live cooking demonstration where you will see Wolf and Sub-Zero appliances in action and sample the delicious results.