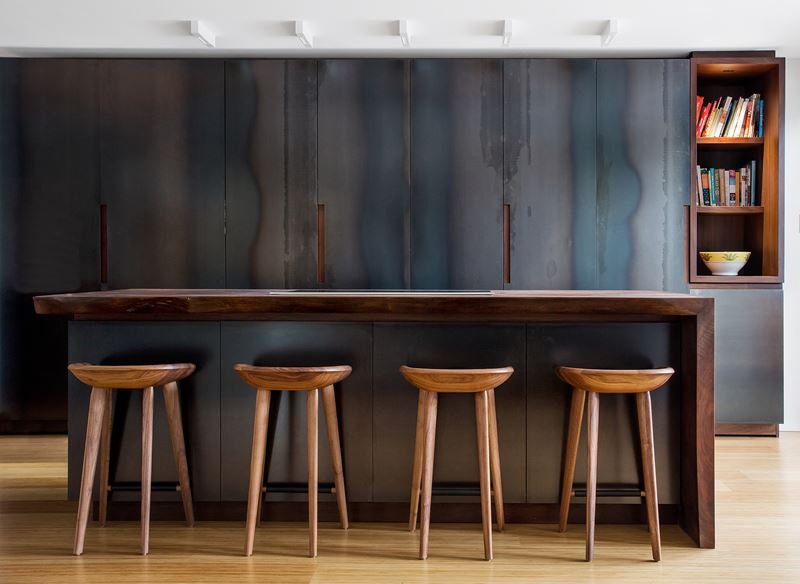 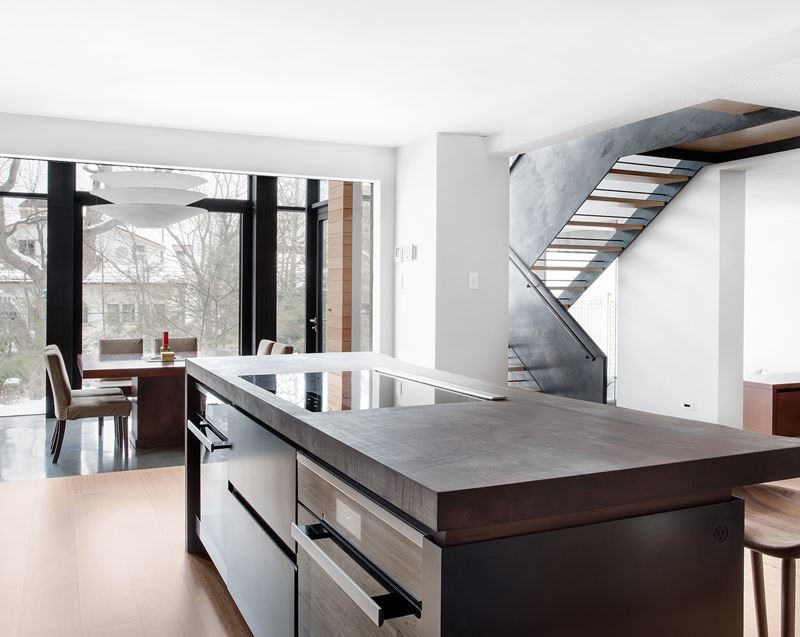 Such was the case when Montreal architects ARCHITEM Wolff Shapiro Kuskowski were called by a young family who lived in a modestly-sized modern home. They sought something fairly simple: an addition that would give them the office space they needed.

"As we walked through the house with them, we learned they had other frustrations," says Eduardo Carrera, an associate architect at Architem who embraced this challenge "Especially with the kitchen – it was so narrow and cluttered, they often had to walk through it sideways, especially when their children had friends over."

The problems went beyond the kitchen. The layout of the home was very segmented. Some spaces felt cluttered, others were underutilized.

"We reimagined and restructured the house," says Mira Katnick, a partner at ARCHITEM. The office addition became a whole house makeover, one that would meet all the family's needs for many years to come.

In the new plan, three walls were removed, and all the spaces on the ground floor were connected to create a continuous, fluid space. A new staircase, open to views of the backyard, led up to the second floor. And the office space looked out onto a new rooftop garden, one that featured not only vegetables, but also an ever-changing, endlessly fascinating display of flowers and pollinating insects.

But as you might imagine, it is the kitchen where the architects had the most profound impact on the homeowners' lives, with a new space that is ideally suited to working and entertaining, even with a dozen or more guests.

ARCHITEM brings a special level of creativity and customization to every project they take on, whether it's residential or commercial. For this kitchen, they hit on the idea of cladding the cabinets in hot rolled steel, in stunning contrast to the live edge walnut topped kitchen island.

"It is a material we'd worked with before, but only on a limited basis," says Eduardo. "We'd done a fireplace with it, and part of another kitchen. Here we decided to push our boundaries, and use it to its full effect."

"We rejected the first few batches from the factory," says Mira. "Then we received exactly what we wanted, a steel with a beautiful natural patina, with nuances of blue and black."

"Millworkers are not used to working with steel," says Eduardo,” but we found one who was expert at it, who had also done metal sculpture.”

The finished “blue steel kitchen” has an almost zen-like quality to it – certainly calming, but strangely powerful and moving too. Since the Sub-Zero refrigerators are integrated into the steel-clad cabinets, you don't feel their presence.

"When the kitchen becomes part of the living space," says Mira, "you want it to be more elegant – complementary to the other rooms. That's something that Sub-Zero and Wolf products allow – they're always flexible for our designs."

"[The Sub-Zero and Wolf] Montreal showroom has become a great resource for us," continues Mira. "We can take our clients there, and let them try out different appliances, or even cook food on them. We had one client who wanted to really understand what a convection steam oven can do, that a non-steam oven can't."

"There are so many big decisions a homeowner has to make," says Eduardo, "[the] showroom helps them develop a comfort level with the kind of kitchen they want."

Another request from the client on this project was a children's work/playroom next to the kitchen, so the kids are reachable even during meal preparation. Again, ARCHITEM delivered a memorable custom touch: a room with an easily adjustable work table, large chalkboard and ceiling fixture that incorporates the children's artwork.

As an award winner in the 2016 Sub-Zero and Wolf Kitchen Design Contest (KDC), "Blue Steel Kitchen" has earned well-deserved recognition – and inspired a great many oohs and ahhs. But even more rewarding to Eduardo, Mira and their colleagues is knowing how what joy, togetherness and laughter their exceptional design has brought into the lives of this young Montreal family.