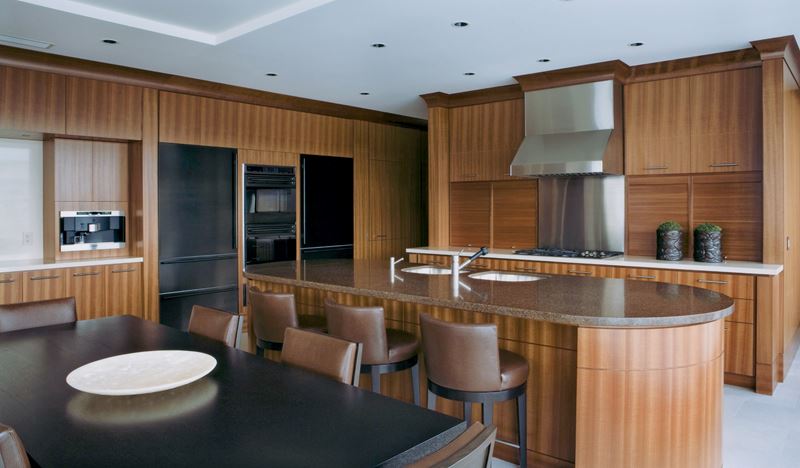 Soaring above Vancouver's Coal Harbour, the kitchen in this luxurious penthouse is wrapped in Sapele and open to stunning views of the Pacific Northwest.

This busy executive and his family travel frequently but with mountains and ocean, people walking on the boardwalk below, and seaplanes traveling past their 25-foot floor-to-ceiling windows, it is hard to forget when they're in the magnificent Pacific Northwest. Interior designers Robert Ledingham and Frank Ranieri sought to capitalize on the view and reflect the warm personalities of the owners in this two-level penthouse. They did such a skillful job that HGTV selected the apartment as its number one pick on its production titled Top Ten Rooms With a View.

In the kitchen, Sapele paneling applied in a vertical grain subtly contrasts with figured versions of the same species on doors and above the fireplace's stone mantle. "All the paneling is storage," says Ranieri. "It's seamlessness. With so much beauty around you, less on the eye is better!" Tambour doors break up the verticalness with horizontal slats and harbor 20 inches inside for coffee maker, blender and mixer that glide out on Sapele trays. Leaving the Sub-Zero refrigerator and freezer unpaneled marks delineation between the living area and kitchen. A separate caterer's kitchen contains everything needed to serve large groups like the 60 players of the Canadian Olympic Hockey Team who dined here recently, the pocket doors closed off to the living area to contain the hustle and bustle and cooking aromas.

The only line the designers really want noticed is the horizon line outside. Limestone floor tile looks butted together but has a very fine grout line, and the white countertop was selected for its neutrality and large size that eliminates seams. Above the Wolf 36-inch range an easy-to-clean custom hood and backsplash in brushed nickel tie to the Wolf cooktop, further reducing visual noise that could potentially distract from the conversation, great food and amazing view.