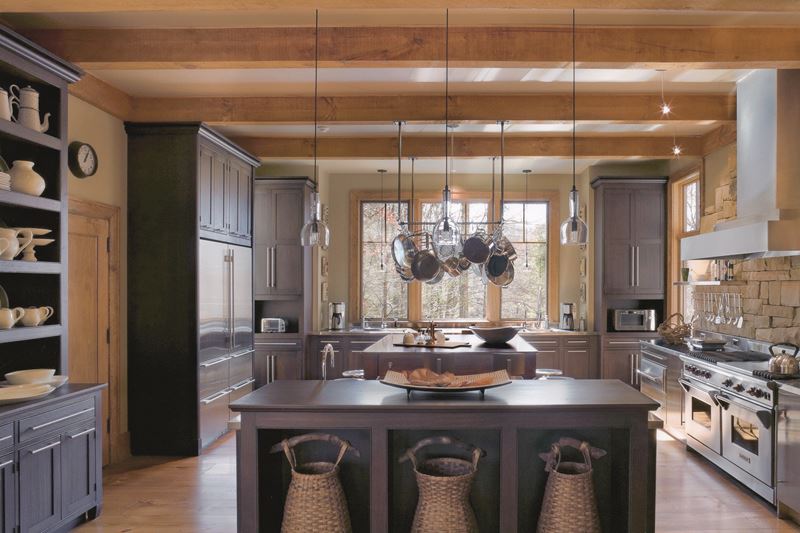 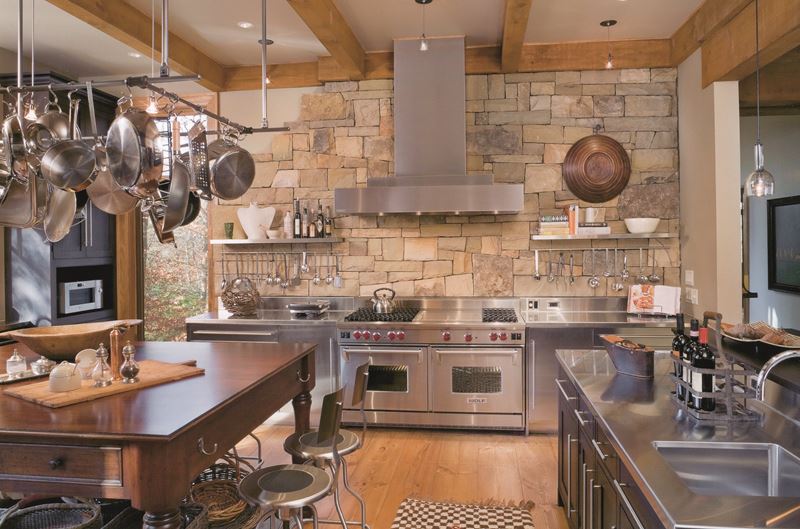 This transitional mountain retreat is informed by local materials and craft traditions, and a kitchen that makes everyone feel right at home.

Tucked into the curves of a stream and adjoined to a state park with views of Grandfather Mountain, the site for this new home in Linville, North Carolina brings to mind the spectacular setting of Frank Lloyd Wright's iconic Falling Water. The owners, a retired banker and his spouse, are avid art collectors who live most of the year in Houston, but wanted a summer retreat to invite an extended clan of friends and family for large gatherings where everyone from grandkids to avid cooks would feel at home—especially in the kitchen.

Architect Kent Lineberger created multiple work zones along one seamless piece of stainless steel where two large sinks, two dishwashers and two separate sets of trash and recycling cabinets give everyone room to work. An island beverage area divides kitchen from hallway and family room and displays locally woven baskets specially commissioned for the display niches. "The quest was to do something that feels fitting in the mountains of North Carolina, but also with a refreshing sense of our current age," says Lineberger. Other indigenous touches inside include Poplar bark shingles, old growth Eastern White pine flooring, and local stone across the cooking wall that matches the exterior stone, all cut to match the natural stratifications seen in the hills outside.

A visit to their local Living Kitchen convinced the couple that a Wolf 60-inch gas range with French top and S-shape grates would be perfect. "They easily saw themselves using it to produce simple as well as gourmet meals," says Lineberger. "It's also fairly easy for visitors to use." Positioning an integrated Sub-Zero refrigerator and freezer together in a tall cabinet is another detail that gives the space its inviting appeal. Sub-Zero's preservation aspects also give the family confidence in the freshness of their ingredients when an unexpected snow keeps them from getting to the market—a phenomenon that delights the Houston couple almost as much as having their kitchen filled to the brim with family and friends.