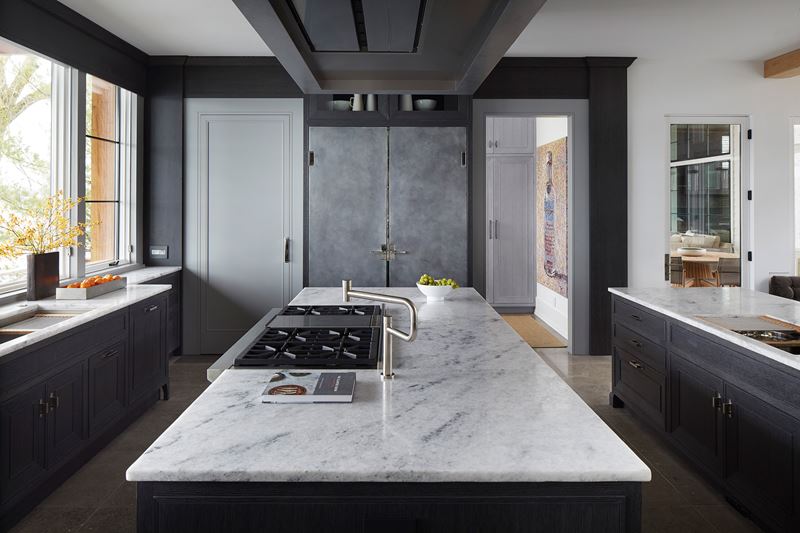 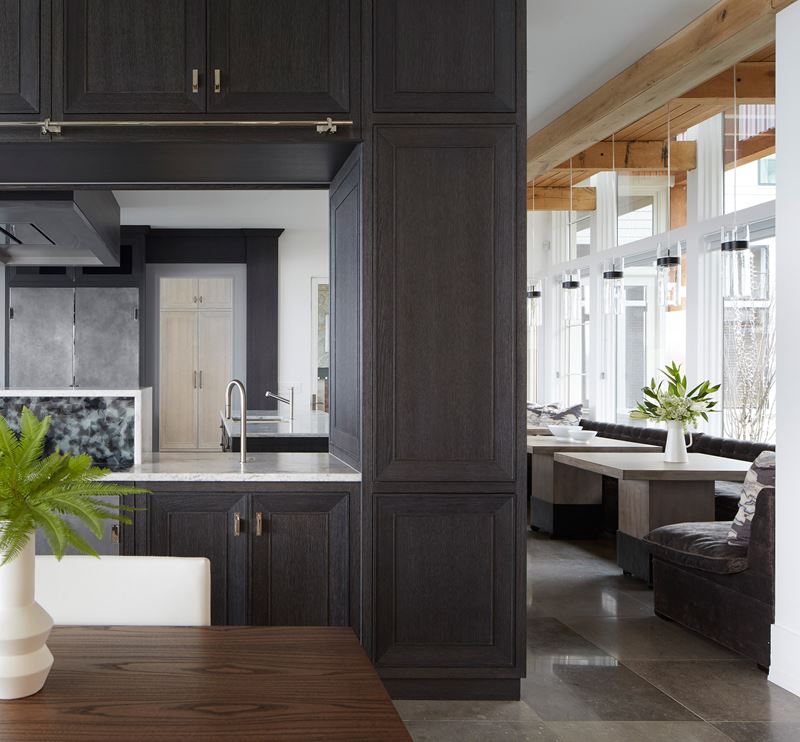 Take a lovely lake location. Add owners that like to entertain. Throw in six kids (and their “always seem to be hanging out” friends). What kind of kitchen do you need?

A big, hardworking one, with the same stunning transitional décor as the rest of this splendid Michigan home. It was a challenge for designer Doug Durbin, but just the kind he thrives on.

The space had a very large footprint with tall ceilings – essentially one room, comprised of the kitchen, wine area, lounge, dining room and family room.  So Doug started with a large peninsula, to define the boundaries of the kitchen and provide both function and storage. It has two-sided cabinets at the ceiling, anchored at the end by a tall back-lit cabinet that stores a ladder for elevated access. The peninsula also houses a built-in coffee machine and spout, slightly raised section with two Wolf single ovens, two warming drawers, convection steam oven and microwave drawer – strictly for popping popcorn on movie nights.

To create enough prep space for this large crew, Doug designed two islands. The outer island is primarily a seating and entertaining area, but also has a second sink – often filled with ice and beverages – that can be used for food prep, especially when there’s a second cook in the kitchen.

It’s the middle island where the cook has everything at his or her fingertips: plenty of counter space, a huge multi-functional sink and a Wolf 48” gas rangetop with infrared griddle, powerful and precise enough for any type of cooking. The cook can move easily between this central cooking area, the ovens on the peninsula and the Sub-Zero 30” refrigerator column and 30” freezer column on the south wall.

Even while food preparation is going on, the open-plan kitchen allows the cook to feel connected to the family activities going on in the rest of the home.

This kitchen would be an award winner purely for its functionality and understated elegance, but it is also notable for its attention to the smallest details. Doug was trained as a master cabinetmaker, so it’s perhaps not surprising that much of the decorative hardware is custom designed specifically for this project. For instance, the contemporary refrigerator levers and square barrel hinge plates are machined flush into the softly textured metal doors, an element that is repeated on a smaller scale on the dining buffet doors.

Ultimately though, this is a kitchen that was not designed to be admired, but to be utilized and enjoyed by this large, gregarious family for many years to come, on the shores of Paw Paw Lake.